skip to main | skip to sidebar

Visiting blogspot after months..
Hope you have all been doing well.

Ayesha
Posted by Ayesha Parveen at 11:45 PM No comments:

Most parents want the best for their children and would do all in their power to protect and nurture them. However, how much can we do? We can give them the best formal education we can afford, save money for them and pray to God to bless them.
Is that enough? No matter how hard we try to make our children's lives trouble-free, we all know that no one's life can be such. Problems and pain will come inevitably. What we as parents should do about this is to speak openly to them about this reality. Then, they need to feel that they will be able to deal with difficulties. Parents should demonstrate that they have faith in their children. Moreover, children need to be taught that it is okay not to be able to achieve all that we aim for or desire. Stress needs to be put on being just, even if it does not bring material success. Once, they are comfortable with the occasional failure or disappointment in life, they will be happy and emotionally strong enough to deal with travails.
Finally, children should be given the good news of a dear friend watching over them and us all the time. That friend, God, can be called by any name. But children, like adults, need to communicate with Him.
I think, this is the best legacy we can leave for our children.
Posted by Ayesha Parveen at 4:05 AM 6 comments:

Have been very irregular at blogspot, I admit. Hence, no idea how many will read this post. Even then, chances are that I might get a few brickbats for writing the following, but I just have to write it:
He was an exceptionally handsome boy, and a boy with a heart of gold. Very rarely do we come across people who inspire others, heal others without expecting anything in return. He is one such, always has been.
When Ashu had first met him, he was about 10, and she 8.
His parents gave him the best education they could afford, and brought him up with good human values. He gave up his training for a certain lucrative career only because he could not adjust to what was being expected of him: to smoke, was one of them.
All along, he has been a sensitive person; both to the feelings of others as well as his own. Girls and women find him very attractive, and Sanjana met him when they were MBA students. She found in him a very 'good catch' and left no stone unturned to marry him as soon as possible. One of the many things she used in order to impress him was that she came from a family of three sisters and a brother (the brother being the youngest sibling), cleverly indicating that her parents kept on having children till that one son was born! The picture she painted was that of an unappreciated girl now grown into a woman eager to have her identity as an individual.
He was very impressed, although did not want to rush into marriage. Sanjana insisted, saying that her parents were pressurising her.
He and Sanjana got married, when he was 27, and she 25. Although they belonged to different communities (a big issue, in Indian marriages, generally-speaking), his parents supported his decision.
Is he happy in his marriage?
No.
He is miserable; although he tries his best to hide his pain from the world.
Sanjana has no time for either him or for their child. His parents live in a different city because she refuses to adjust with them in any way. When his daughter was 15 months old (the child's mother was then 32), she was sent to his parents who looked after her for 6 months.
Sanjana is a career-idol to many, including some of his relatives.
He is a man with a heart of gold, but has withdrawn himself from others because he is unable to bear the fact that he had chosen the wrong person.
Ashu knows it all even without his saying things openly, and he knows that Ashu knows.
Both he and Ashu remain silent.
Posted by Ayesha Parveen at 10:05 AM 8 comments: 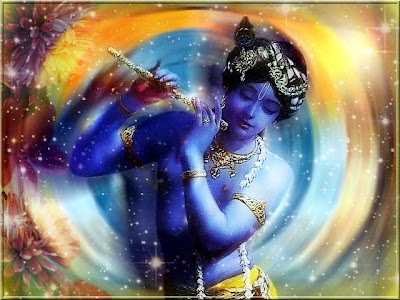 All was dark, till your face was seen.
The light and peace that are here now
Have come from you.
O Vaasudev, you are beauty!

In every agony that I have felt
You have given comfort
And healed wounds.
O Vaasudev, you are love!

When all else fail, and
Joy and hope abandon me,
I cling on to you,
Hoping to survive.
O Vaasudev, you are life!

As your call will be heard
Making me depart from this world,
May your name be on my lips,
And, you shining in front of my eyes.

Hold my hand then, as you are holding now..
O Vaasudev, you are mine.
Posted by Ayesha Parveen at 11:34 AM 11 comments:

What drives an apparently successful person to kill himself? By 'successful', I mean that by social yardsticks: money, mate, status, looks, popularity.
I feel that a person can kill himself only if he feels life is not worth living. So, inspite of havings all the trappings of success, such people are not comfortable with themselves. No amount of earthly success can guarantee happiness, if self-esteem is low.
When a person does his best and is not impatient or greedy for result, when one makes decisions based on his conscience and common-sense and does not succumb to the opinions of others, he does not kill himself.
Life is both a test and a gift. One ought to respect and cherish it.
Posted by Ayesha Parveen at 12:47 AM 14 comments:

I shuddered as I watched on the TV, news of people killed by their kith and kin.
What were they killed for?
For marrying the people they chose for themselves.
Where did the killings take place?
In Delhi, India's capital.
I feel that as a nation, we are hypocrites. On the one hand, we claim to have a grand civilization of thousands of years, and on the other hand, we commit all kinds of atrocities possible.
In the name of upholding traditions and customs which blatantly go against basic human rights, we have stopped practising what used to be the corner-stone of Indian values, sarvo jeevay dayaa or compassion for all.
Are Indians listening?
Posted by Ayesha Parveen at 10:42 AM 8 comments:

Followers of the blog